Sint-Baafs: a labour of LOVE 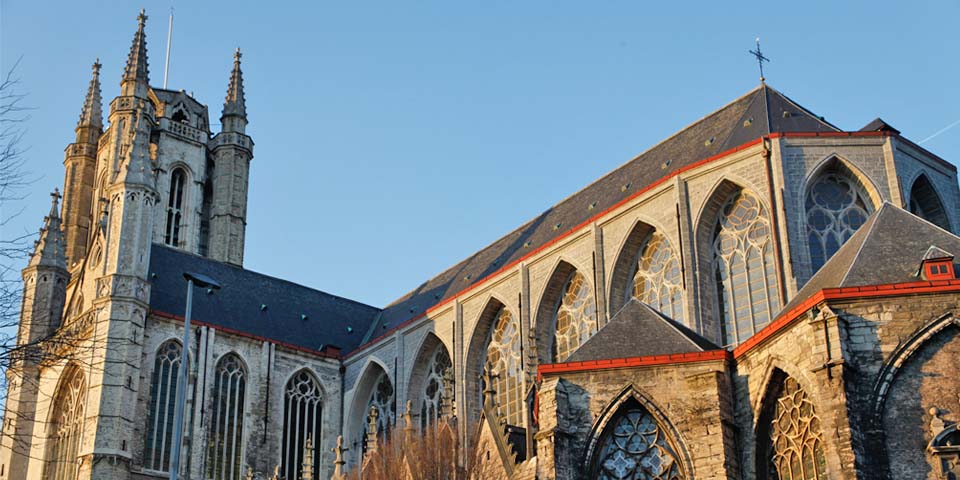 The imposing building we see now is the result of a labour of love which took centuries to complete.

Sint-Baafs church can be dated back to the chapel of Saint John the Baptist, consecrated by Transmarus bishop of Tournai and Noyon in 942. Traces from a later Romanesque church can still be seen today in the richly decorated crypt of the cathedralyon, in 942. The Romanesque church which followed this one has left some traces in the crypt.

Ghent, which in the Middle Ages was one of the most important cities in Western Europe, could easily afford to build newer and grander churches. Our church was more or less being permanently rebuilt from the fourteenth to the sixteenth century. By the middle of the 16th century the church had more or less its current exterior aspect.

The aftermath of the rebellion against emperor Charles V in Ghent in 1539 saw the dissolution of the centuries old abbey of Saint Bavo. The abbot and monks became canons in a Chapter that was attached to what now became the church of Saint Bavo.

In 1559 the diocese of Ghent was founded and the church finally became a cathedral. The rich baroque interior of the church shows the influence of one of the longer ruling bishops of Ghent, Antonius Triest. 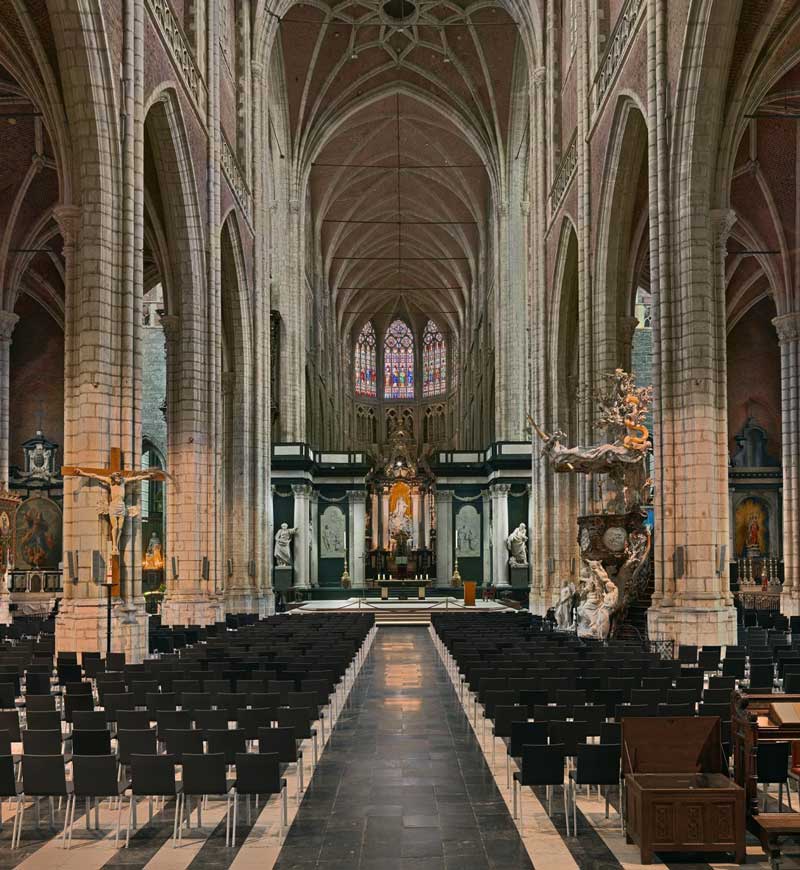 RESTORATION OF THE TOWER

The 7th of May 2013, bishop Luc Van Looy removed one of the stone pentacles, ten meters high, from the tower of the Saint-Bavocathedral. This symbolicly started the restoration works. These activities will take five years with a cost of 6.300.000 euro.
The contractor will put a canvas around the tower, which will show a print of the Mystic Lamb, and references to musea and partners.

Through various restoration premiums the Flamish Government (Vlaamse Overheid, Onroerend erfgoed), the restoration campaign of the Saint-Bavocathedral is partly financed. 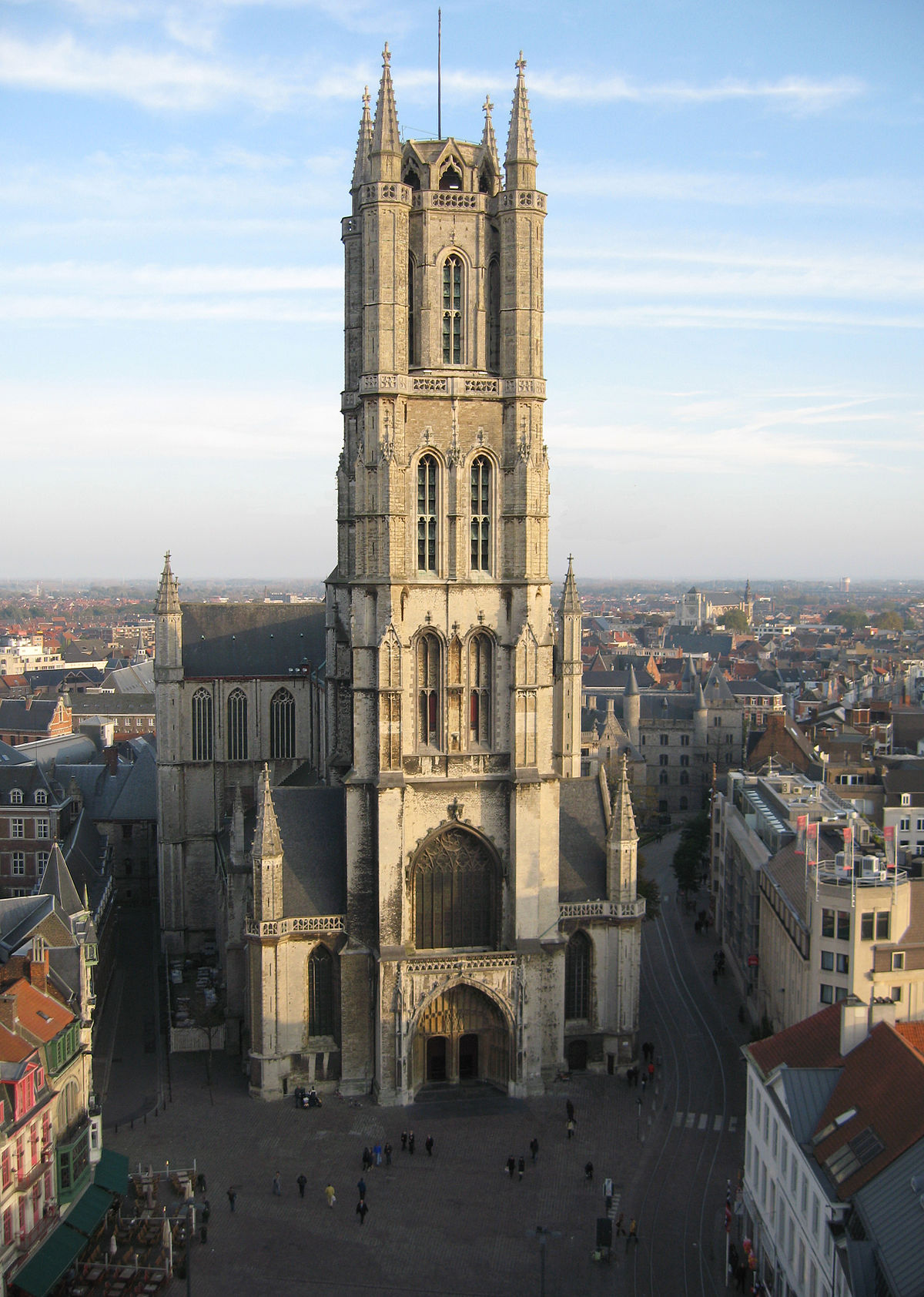 The cathedral is home to works of other artists of note. It holds the painting Saint Bavo enters the Convent at Ghent by Peter Paul Rubens. There are also works by or after Lucas de Heere, one of which is a View of Gent. Frans Pourbus the Elder painted 14 panels representing the History of Saint Andrew (1572) and a Triptych of Viglius Aytta (1571). Caspar de Crayer is represented by paintings of St Macarius of Gent, The Beheading of Saint John the Baptist and The Martyrdom of Saint Barbara. The church also holds works by Antoon van den Heuvel including the Christ and the Adulterous Woman and the Resurrection of Christ. There are also works by Lucas van Uden and Jan van Cleef.

In the Chapel of the Holiest an important Calvary Triptych is on display. This 15th-century work is attributed to Justus van Gent. Finally a valuable collection of important liturgical Orfèvrerie, Relicaries and liturgical vessels from the 15th century until today. Amongst the relicries the important head Reliquiarie of Saint-John the Baptist and Saint Macarius can be admired. The Important collection of hand embriodered and brocated liturgical ornamentsis widely known as one of the most important of the country, some peaces are put on display. 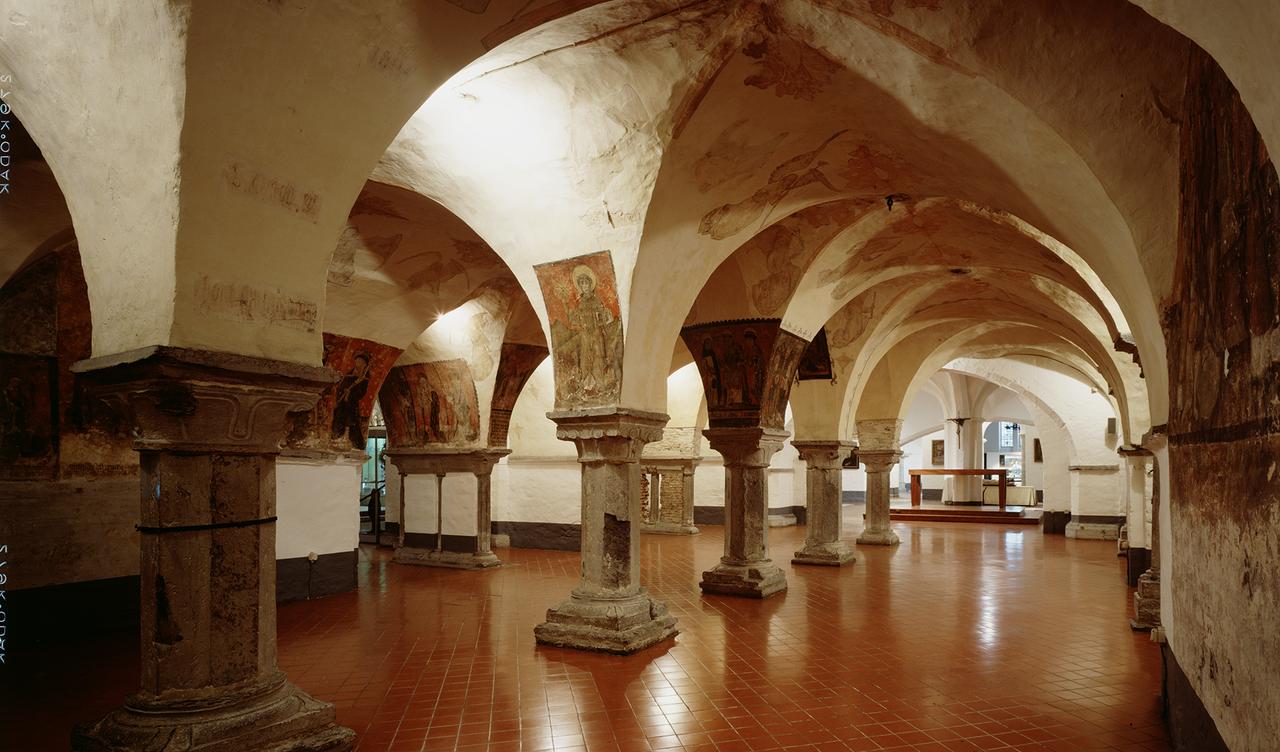