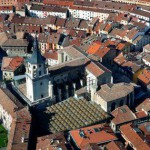 Vitoria Cathedral is located on the highest part of the hill upon which the old settlement of Gasteiz was built, within the limits of the old city walls. The hill, with the cathedral at its northern end, runs north to south about twenty metres above the Alava Plain that surrounds it in all directions. The cathedral itself is build on part of this slope, as is evident in the fact that its southern and western walls, which face the old city located on the higher ground, are raised approximately nine metres above its north-eastern façade, which is located halfway down the hill.

As a result of these geographical and historical conditions, the subsoil of the building contains a large amount of imported earth, brought in specially to help level the floor surface inside the cathedral. Another consequence of the uneven landscape is the enormous difference in the height of the walls between one side of the building and the other.

From historical documents that chart the evolution of the city’s oldest quarter, we know that the cathedral once formed part of the medieval defensive battlements. This explains the thickness of its walls, which were originally windowless on the north side, as well as the presence of a ramparts walk, which ran along the entire length of the building, from the southern end of its crossing to the north-western corner of its portico, past the ambulatory, transept and north nave.

Defensive aspect of the cathedral building has, however, been obscured somewhat over the years by the construction of housing and service apartments on its eastern flank, where the steep drop from the ramparts walk to the ground (around twelve metres) would have once lent an imposing air to the outside of the ambulatory, similar to that so evident still on the northern side of the crossing. Today, the Cathedral forms part of a block of multipurpose buildings that have the effect of hiding its sheer size. This, along with the absence of a traditional ‘main façade’, prevents the cathedral from projecting the ‘monumental’ image so often associated with historical religious buildings.

Fortunately, the evolution of the city finally left a clear area at the south-western corner of the building – Santa María Square, from which visitors can gain access to the cathedral from a slightly lower floor level. To the west and north, Fray Zacarías Martínez and Santa María Streets run up the slope from the square to Cuchillería Street, along the west and north façades, respectively. This last street, which follows the curving façade halfway down the hill around what was once the old city walls, is lined with a series of later buildings.

With a pronounced Latin cross-shaped floor plan, three naves, chancel with ambulatory and radial chapels, Santa María Church contains a wealth of elements corresponding to the different periods of the gothic tradition.

The 19th and 20th centuries saw the construction of numerous other administration, storage and service buildings, mainly as the result of the transfer of the episcopal see to Vitoria and the conversion of the Collegiate Church into a Cathedral in 1861.

Basically decagonal in shape, the ambulatory consists of five trapezial sections which lead to five apsidal chapels, the three central ones being semidecagonal in shape while the two end ones are trapezial. These chapels give out into the arms of the crossing, forming a very curious structural composition.

The apsidal chapels are illuminated on three of their sides by carved windows which look out over the ramparts walk, between the buttresses that support their vaulted ceilings. The trapezial chapels have only one window, which also looks out over this walk. These openings provide a source of light for these small spaces nestled between the thick, otherwise windowless stone walls that once formed part of the city’s defences.

All the ceilings in the ambulatory are vaulted. The aisle and end chapels are covered with simple four-part vaults, while the apsidal chapels are crowned with six-part vaults on each side and over the entrance.

Except for the set of buttresses and the windows set into the wall, the outside of the ambulatory is hardly visible at all, being hidden behind a series of service apartments. It is therefore difficult to comprehend the spatial configuration of this part of the cathedral from the exterior.

The powerful structure of the transept, on the other hand, can be clearly seen from the exterior. The immense difference in height between the central nave of the transept and the side chapels and ambulatory, make the huge stone structure impossible to miss as it rises over the rooftops of the lower levels. The structure is made mainly from masonry, although some areas are faced with ashlar, and is adorned by the graceful figures of the buttresses.

Each of the nave’s arms (north and south) comprises three sections, which provide access to the chapels and the ambulatory.

At either end of this great crossing on the eastern side, the visitor can see the rectangular chapels which form part of two impressive masonry towers. Unlike those in the ambulatory, these chapels contain high, extremely recessed loopholes, which do not provide much light. The southern tower is currently hidden by the Sacristy, which prevents us from appreciating what would otherwise be an impressive composition, with the delicate ambulatory set between two imposing towers.

The vaults in the chapels are similar in design and construction technique to those in the ambulatory: four-part ogival vaults built from ashlar. The central nave is also covered by a series of ribbed vaults, although these are both larger and lighter, with more slender transverse and ogival arches and narrower vault stones than the ones in the chapels.

The central nave is lit by six windows along the east wall, of which the end ones are recent additions, built by the restorer M. Lorente. Round windows are also set into the north and south walls, the one on the south side being composed of three lower arches, which are also a later addition constructed by M. Lorente.

NAVES AND SIDE CHAPEL

Similar in volume to the transept, the main area of the cathedral consists of three, five-section naves, with the central one being much higher than the two side ones (and therefore clearly visible from the outside). These naves are set at right angles to the transept, forming a Latin cross.

The side naves contain chapels leading back from the base of the abutments of the upper buttresses. Some of these chapels are of quite a significant size, while others are little more than niches between columns. They are covered by ogival vaults very similar in style to those in the ambulatory: three-part vaults with robust support ribs and thick ashlar vault stones.

The central nave, on the other hand, is covered by a series of more delicate vaults with simple, ogival ribs except in the initial section near the entrance, which is crowned by a vault reconstructed later during the 17th century, featuring intermediate ribs and liernes and resting on narrower, less robust arches.

As regards illumination, the southern side nave contains a series of lancet windows overlooking the square and set between the walls, thereby protected from the inclemency of the weather. The northern nave has a small round window.

The windows in the central nave were also subjected to drastic modification by the architect Lorente. The north and south walls of the first section have no windows, although there is a great oculus in the western façade. The second, third and fourth sections are lit by six small round windows (the four westernmost ones added, and the easternmost one re-opened, by Lorente), and the section immediately prior to the crossing contains two high, narrow lancet windows facing north and south.