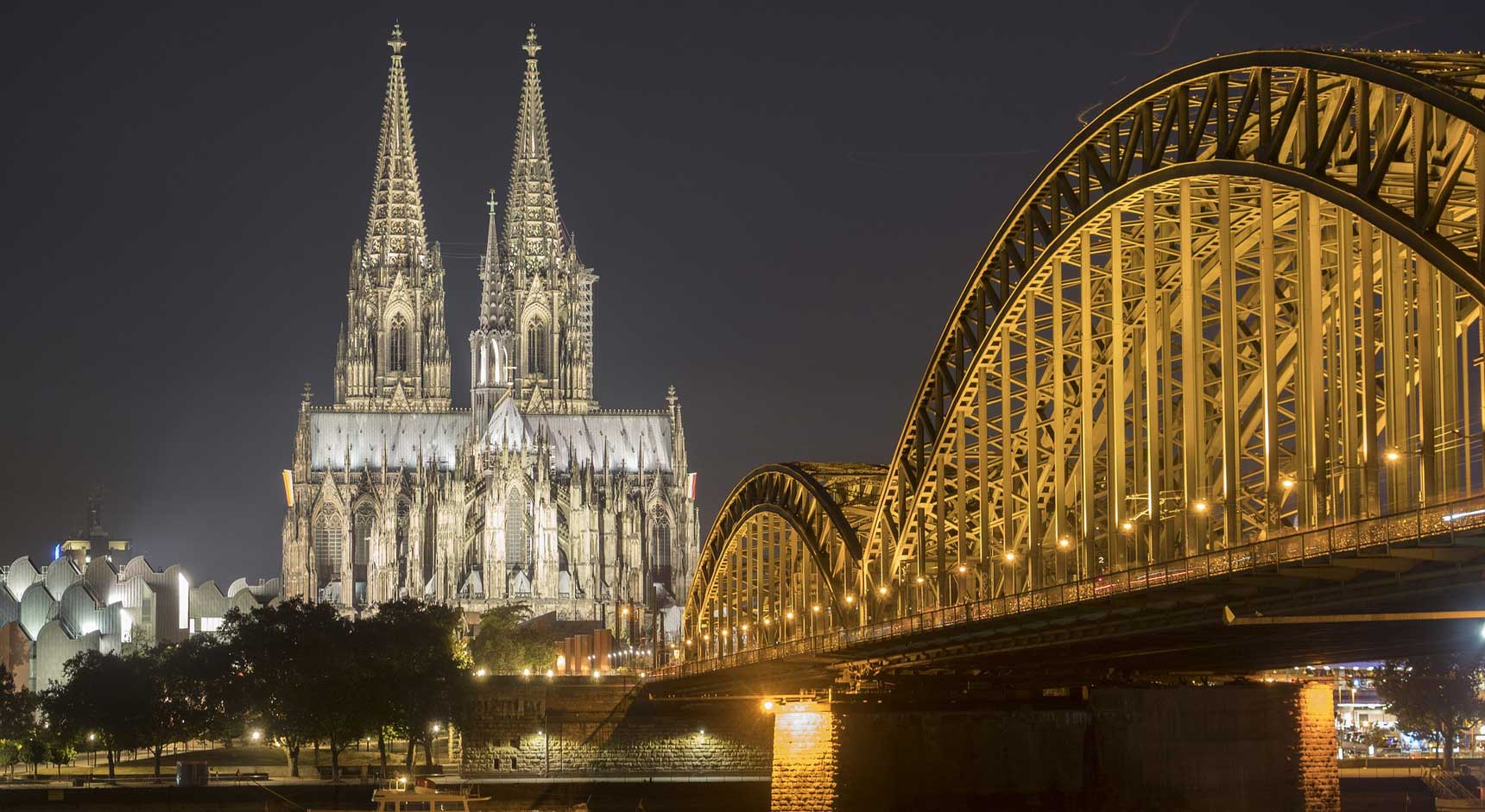 The foundation stone of the Gothic Cathedral was laid on 15 August 1248 on the celebration of the Assumption of the Virgin Mary. Apparently the Old Cathedral was no longer sufficiently representative to house the mortal remains of the Three Kings, which Archbishop Rainald von Dassel brought back to the cathedral city in 1164 from the conquered city of Milan. These relics made the Cathedral one of the most important pilgrimage destinations in Europe. In the early 16th century, building was stopped – partly due to lack of money, partly due to lack of interest.

At this point the chancel, the lower section of the South Tower with bell tower as well as the long nave and the cross nave were completed up to the lower arcades. The North Tower was almost completely nonexistent. For more than 300 years, the city’s panorama was dominated by the mighty torso with a huge building crane on the incomplete South Tower.

Around the turn of the 19th century the supporters of the German Romantic movement reawakened public interest in the completion of the Cathedral thanks to their enthusiasm for the Middle Ages. Continuation and completion of the building now became a matter of national interest to the Germans. In 1842 King Friedrich Wilhelm IV laid the foundation stone marking the continuation of building work. The Cathedral was completed in 1880 – in accordance with the plan originating from the Middle Ages – in a record time of just 38 years.

It is nothing short of a miracle that, although badly damaged, Cologne Cathedral survived the Second World War in spite of extensive bombing. Nowadays the main factors affecting the Cathedral are weather and environmental influences. Over 80 stonemasons, glaziers, roofers and other specialists are constantly at work on the maintenance and restoration of the Cathedral building. 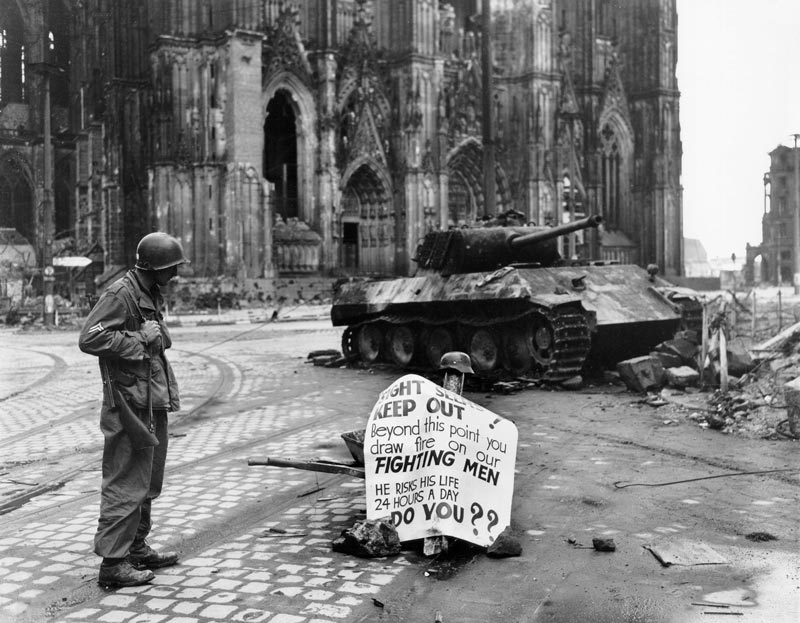 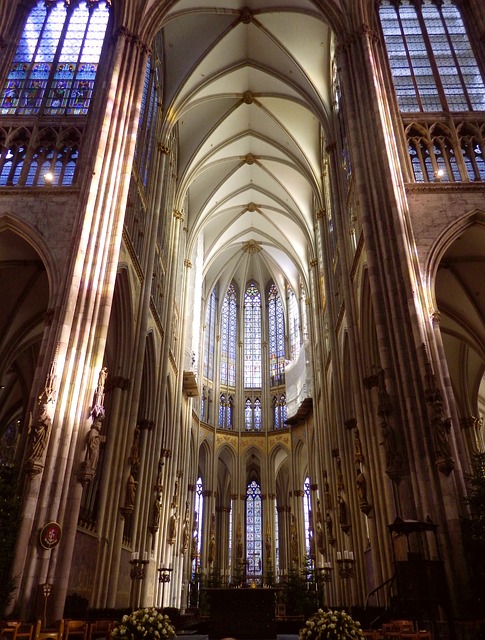 The stone mass seems to rise, almost weightlessly, up to the 43m-high baldachin-style arches. The narrow main nave that leads to the chancel is accompanied by two side naves. In the northern side nave, the light shines through five spectacular glass windows, which stem from the later years of Cologne glass painting (1507/1509).

In 2007, a totally new lighting concept was created in the south cross nave of the Cathedral. The light, plain glass window that had replaced a window destroyed during the Second World War was removed. Gerhard Richter, an artist living in Cologne, created a new work of art out of endless coloured squares covering the 100m2 area, which is in tune with the visions of the master builders from the Middle Ages.

The crossing features the modern bronze altar by Elmar Hillebrand (1960). Behind this lies the high chancel with the choir ambulatory – one of the finest sanctuaries in the Western world. The choir stalls have 104 seats making them the largest in Germany. The chancel paintings were added in around 1340. Above these, you will see the older chancel pillar sculptures of Jesus, Mary and the 12 Apostles. In addition to the Adoration of the Magi, the entire circle of glass windows in the upper floor of the central nave depicts a further 48 royal figures.

Behind the high altar, the Shrine of the Three Kings rises up; the relics of Caspar, Melchior and Balthasar-the city patrons of Cologne-rest here alongside the relics of Saints Felix and Nabor and Saint Gregory of Spoleto. This impressive work of medieval gold craftsmanship surpasses all other shrines in the Western world in terms of size and grandeur.

On the way to the choir ambulatory, you pass under the organ loft. The Gero Crucifix hangs in the crucifix chapel and is the oldest remaining large sculpture of the crucified Christ this side of the Alps. The oldest window in the Cathedral (from around 1260) can still be found in its original position in the Axis Chapel (Chapel of the Three Kings). It shows topically related scenes from the New and Old Testaments in two parallel rows.

Another large work of art can be found in the chancel of Mary’s Chapel. It is a triple-winged altar picture (triptych), painted by Stefan Lochner for the Town hall chapel, that portrays the city’s saints – the Three Holy Kings, St. Ursula and St. Gereon along with their fellow martyrs.

In the Medieval sacristan crypt, the Cathedral treasury is home to a rich find of church treasures dating as far back as the 4th century. The treasury works of art are made of gold, silver, bronze and ivory, and include holy relics, liturgical items, textiles, insignias of Archbishops, sculptures from the Middle Ages and Franconian grave finds 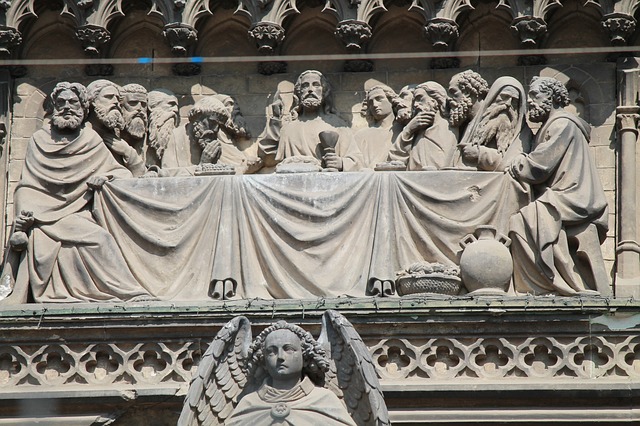 The platform of Cologne Cathedral’s South Tower offers an impressive view from a height of approximately 100 m. In order to enjoy the impressive view across the city and the Rhine from this spot you must first climb the 533 steps. When the weather is good it is possible to see as far as the hills of the Siebengebirge. The climb up the steps to the platform takes visitors past the bell chamber. Out of the Cathedral’s eight bells, St. Peter’s Bell (in Kölsch “d’r Decke Pitter”), is the largest freely swinging church bell in the world and weighs 24 tonnes. 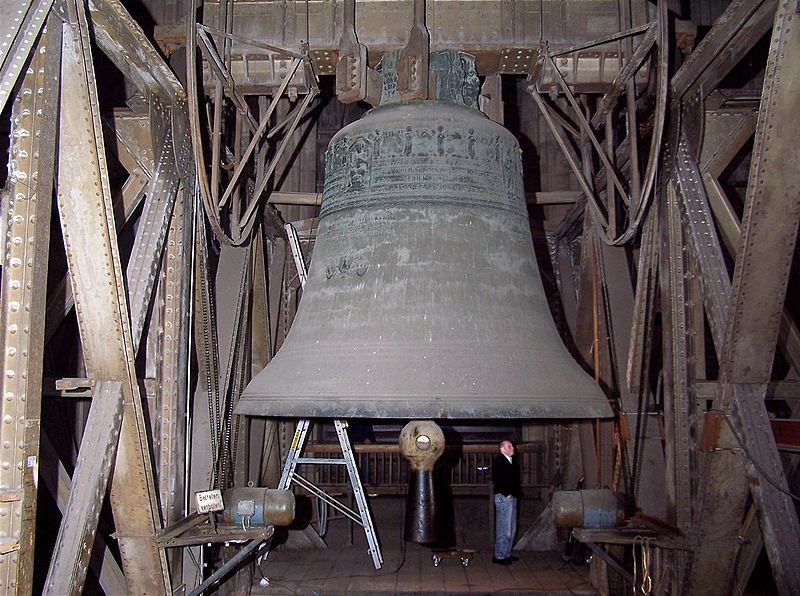